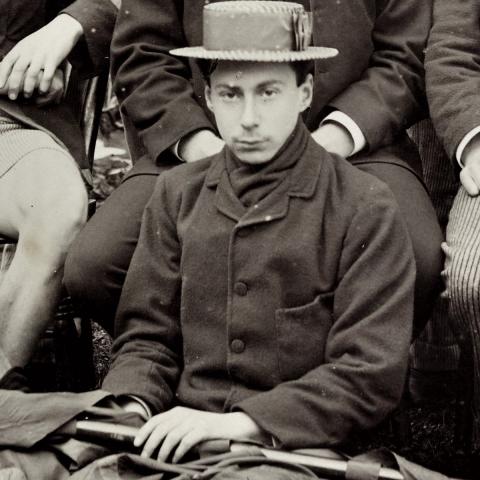 Although Russell’s father Lord Amberley “had been at Cambridge” Russell went because of his interest in mathematics. He arrived in December 1889 when he “was examined for entrance scholarships. I stayed in rooms in the New Court, and I was too shy to enquire the way to the lavatory, so that I walked every morning to the station before the examination began.” While there, he was invited to a dinner at the Master’s house where he met Charles and Robert Trevelyan. He was accepted to enter Trinity on 17 June 1890 and gained a “minor scholarship” (Auto. 1: 56). His success was reported in the press.2

Russell began his studies in October 1890 and had rooms in Whewell’s Court as did C.P. Sanger who “was a freshman like myself, also doing mathematics, and also a minor scholar” (Auto. 1: 56). Since Russell did not describe his rooms, a general description, by S.C. Roberts, from 1934 is provided. “Rooms vary considerably in size, but a ‘set’ almost invariably consists of a sitting-room (or ‘keeping-room’) and a bedroom, the later being sometimes very small. The sets of rooms are mostly grouped on staircases which are entered from the court” (Introduction, pp. 73–4). Dinner is always eaten in the dining hall while other meals may be ordered from the buttery. As for furnishings—a table, desk, chairs, and a bookshelf—are “either left for him to buy at valuation from the outgoing tenant or provided by the College at a small rent; but he is … free to supplement them with furniture of his own” (Introduction, pp. 75–6).

Today the rooms are described as follows: “Whewell’s Court [is] an attractive 19th century courtyard opposite the Great Gate entrance to Trinity. Rooms here are all non-en suite; they are predominately single sets.… the shared bathroom facilities are situated in the basement below” (“Typical Rooms”, p. 10). The cost of constructing Whewell’s Court was borne by William Whewell, then master of the college in 1860. “The building contains 24 sets of rooms with porter’s lodge”3 (Archiseek webpage).

Russell met another friend, Crompton Llewelyn Davies, “in the darkest part of a winding College staircase” where Davies quoted Blake’s poem “Tyger, Tyger, burning bright” (Auto. 1: 58). Russell attended McTaggart’s breakfasts (presumably in his rooms) “which were famous for their lack of food” (Auto. 1: 63). Russell made no mention in his Autobiography of his foray into rowing which took place during his first academic year.4 In 2015 the Russell Archives purchased the cup awarded for the Senior Trial Eights, Dead Heat, 1890. The names of all the rowers appear on the cup;5 Russell is listed as the Coxswain.6 The photograph obtained from Trinity College is captioned “1st Trin: 1st Lent Boat 1891”; thus it was taken during the Lent term the following year. Most of the rowers are different; the captain and the coach are included as well as the rowers’ weights using the British measurement unit of stones. On the side is noted “a good boat” along with some of their results. “The stern four were freshmen”.7 Russell’s rowing career appears to have been confined to his freshman year. There is no evidence he kept up any of the possible friendships he made while rowing. Only one of the rowers, W. Runciman who must be Walter Runciman, wrote a letter on 7 September 1916 to George Trevelyan, objecting to the Prohibited Areas ban placed on Russell by the government. Walter Runciman graduated from Trinity in 1892 and spent his life in politics. In later life Russell continued to receive the annual Black Prince letter which was sent out to all former rowers.8 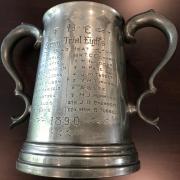 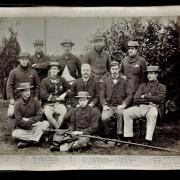 His time at Trinity allowed Russell to form life-long friendships; during the holidays he and his friends often went on walking tours. He met many of his friends through an intellectual society known as The Apostles. Russell described his change in personality during these years from “shy prig” to “gay and flippant” (Auto. 1: 68).

About the time Russell finished with his Tripos examinations, Alys Pearsall Smith had agreed to marry him (Auto. 1:83). He returned to the family home, Pembroke Lodge, before being sent to Paris for three months as an attaché at the British Embassy in the hope that the separation would break their engagement. The couple married in December 1894. The following year Alys wrote to Mary Gwinn, 10 October: “I must tell you that Bertie has really got his [prize] fellowship.9 It was announced to-day, just after I came up, & we watched it all from Bertie’s window.”

In October 1910 Russell returned to live at Trinity becoming a lecturer in the principles of mathematics. He was just finishing up reading the proofs of the first volume of Principia Mathematica; the following year he would proof the second volume. While he had lodgings in Bridge Street with his wife Alys, he also “had rooms in letter I, Nevile’s Court. I became very fond of these rooms, which were the first place exclusively my own that I possessed since leaving Cambridge in 1894” (Auto. 1: 201–2). Russell, writing from his summer lodgings, described his rooms to Lucy Donnelly on 20 August 2011: “You must imagine me in a fairly large room, looking out on a Renaissance cloistered court, with Wren’s library at one end and the Elizabethan College Hall at the other. My room contains many books, but only one picture (the picture of my mother that used to be at Bagley Wood), and the little Spinoza and Leibniz. In the main it is rather severe. For the moment, there is no one at Cambridge, and I have taken lodgings between the Thames and the Chilterns, in a region I got to know bicycling from Oxford…. Towards the end of September I go back to Cambridge” (Griffin, Letter no. 175, p. 387). As noted above by Roberts, residents could buy furniture from outgoing tenants. Russell did this, mentioning in The Problems of Philosophy, Chapter 2: “I bought my table from the former occupant of my room; I could not buy his sense-data, which died when he went away, but I could and did buy the confident expectation of more or less similar sense-data.”

During this sojourn at Trinity, Russell met Wittgenstein, writing a series of letters to Lady Ottoline Morrell in November 1911 about his arguments with his new pupil. He also described a meeting of students in his rooms: “Last night there was a feast, and Santayana was my guest. Afterwards there was a terrific squash in my rooms; I had only just enough chairs, by bringing in all the chairs in my bedroom” (5 Dec. 1913). Earlier in 1913 he finished the proofs of the third volume of Principia Mathematica. Today the rooms are described as follows: “Nevile’s Court is an attractive 17th-century court in the centre of Trinity; on one side is the Great Hall, and on the other the Wren Library.” Bathroom facilities are shared (“Typical Rooms”).

After his marriage to Alys broke down, he rented a flat in London in 1911 in addition to his rooms at Trinity. He was forced to leave Trinity in 1916 because of his opposition to World War I. The contents of his rooms were auctioned off. Because of this, some of the contents at that time are known.10 Goods sold included: carpets, bookcases, chairs, a writing table, dining table, settee, breakfast ware, a coffee mill, towels, sheets, a sponge bath, bedstead, mattress, and pillows. “It was a blow to me during the War to find that, even at Cambridge, intellectual honesty had its limitations. Until then, wherever I lived, I felt that Cambridge was the only place on earth that I could regard as home”11 (Auto. 1: 74). “He returned to Cambridge at sometime before April 1917 to deliver three lectures. Besides discovering that he minded ‘very much having ceased to have a footing there’, he had an emotion-filled meeting with his bedmaker" (Russell Sold Up, p. 76). 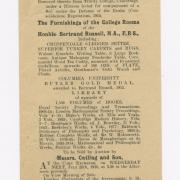 Russell returned to live at Trinity College for a third time in 1944. “Trinity College had invited me to a five-year lectureship and I had accepted the invitation. It carried with it a fellowship and a right to rooms in College. I went to Cambridge and found that the rooms were altogether delightful; they looked out on the bowling green, which was undimmed, and I found the peacefulness of the Great Court almost unbelievably soothing” (Auto. 3: 16). His former wife Alys wrote to Helen Flexner: “We have heard from Bob Trevelyan that Bertie lives on … a staircase next to the Lodge, opposite to George Trevelyan’s relief library on the staircase, so he and George are near neighbours & very chummy” (28 Aug. 1944). Today the rooms are described as follows: “Very few rooms in Great Court are en suite, but the setting within Trinity’s grand 16-century court is appealing to those who like the traditional feel.” Bathroom facilities are shared but most rooms have sinks (“Typical Rooms”).

“After I was a Fellow I found that on one occasion the Council met on five successive days with the utmost secrecy. With great difficulty I discovered what their business had been. They had been engaged in establishing the painful fact that the Senior Porter had had improper relations with five bedmakers …” (Auto. 1: 67).

Russell’s current wife Peter and their son lived in lodgings until Russell could buy a house in 1945. Russell lived there in 1945 and part of 1946. He was photographed both at the house and on campus for an article he wrote about peace for the Picture Post.12 Once the house was sold he moved back into rooms for the Michaelmas term. After that, though he continued to teach, he only spent one night a week in Cambridge.13 His last lecture was in 1949 at Mill Lane; his last letter from Trinity was written on 22 November 1949. Frederick Raphael provided the following description: “The biggest lecture room was thronged beyond its large capacity.… After delivering his lecture, with Whiggish precision, he said, ‘I suspect that some people have come here for the wrong reasons. Accordingly next week’s lecture will be twice as difficult’…. it attracted a greater audience than the first” (p. 123). 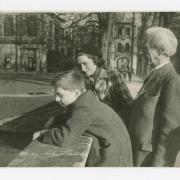 With his wife Peter and son Conrad at Trinity College

Russell is remembered by a brass on the north wall of the Ante-Chapel at Trinity College.14

Russell’s Trinity College rooms have been added to this series because he made his home there and felt very much a part of the community in which he thrived. His only other foray into communal living was the colony at Fallen Leaf Lake in California; he lived there with his wife and children in their own cabin in the summer of 1940. 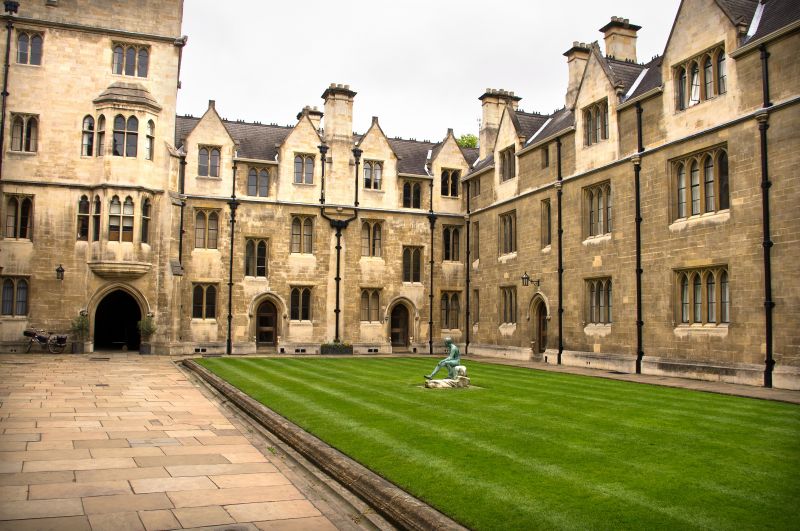 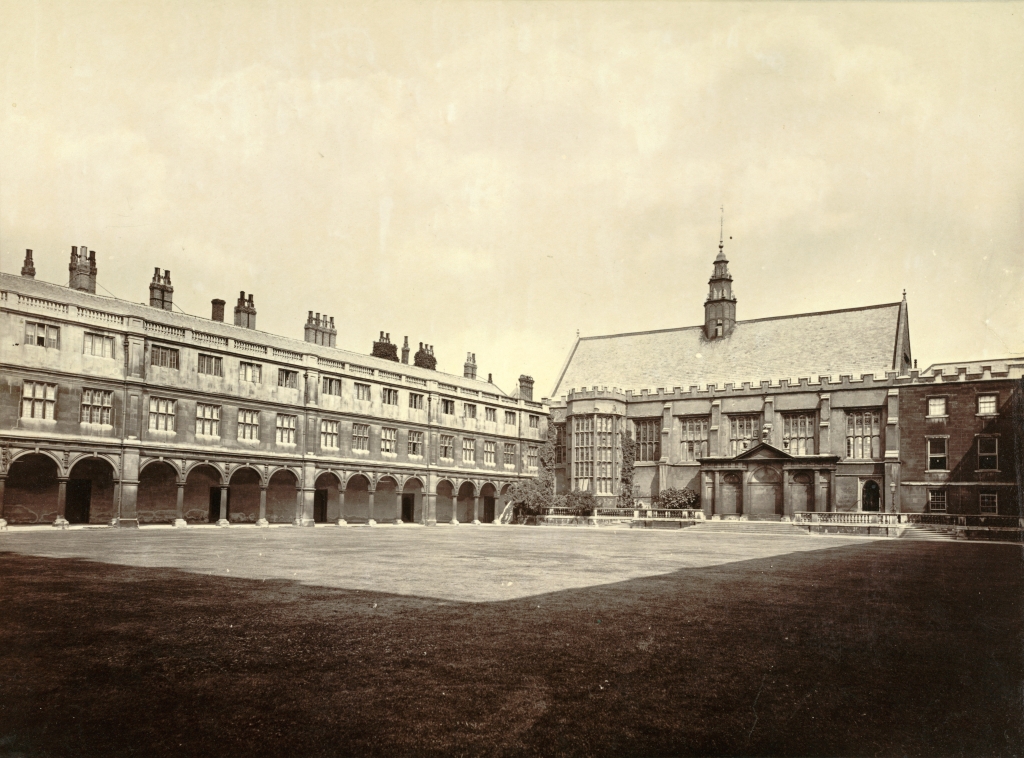 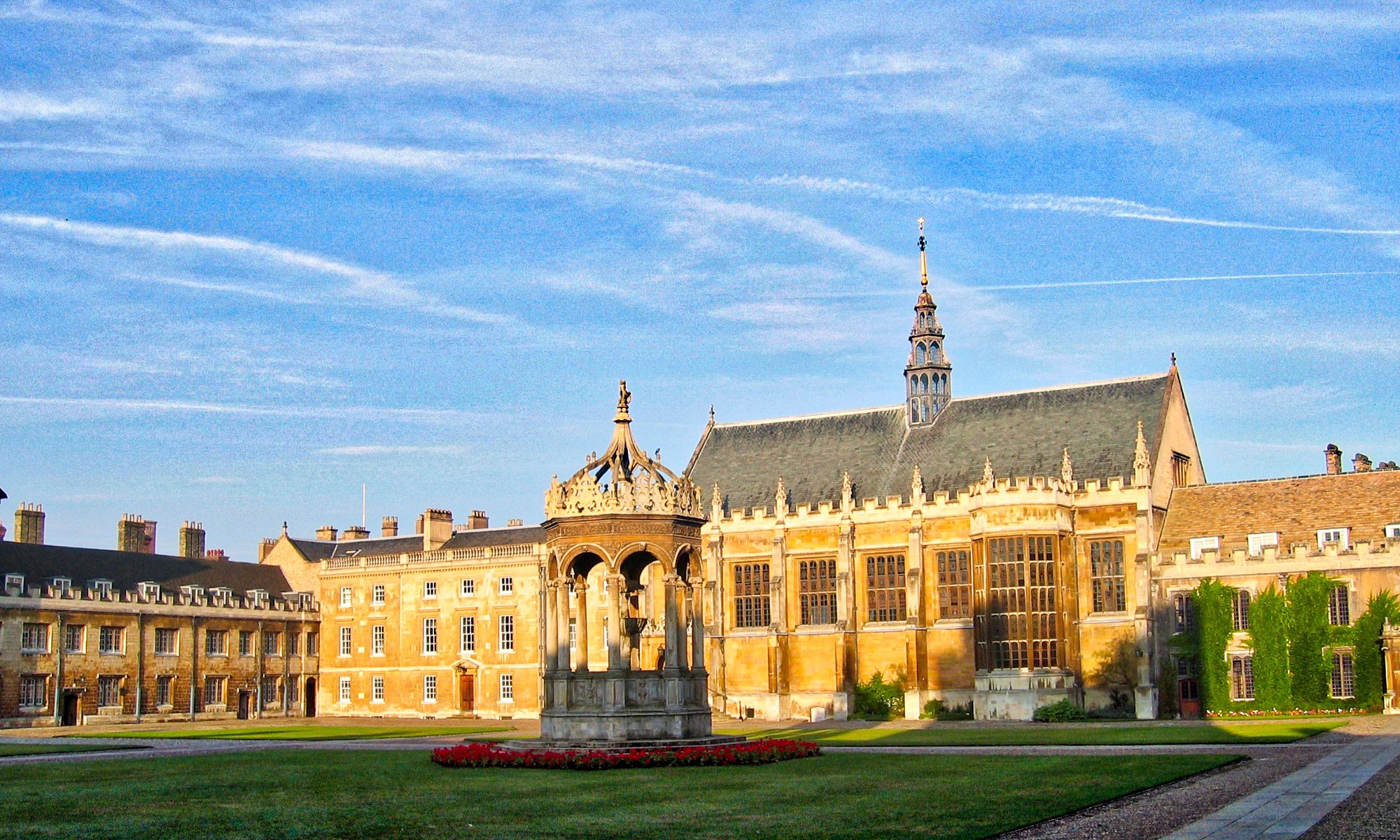 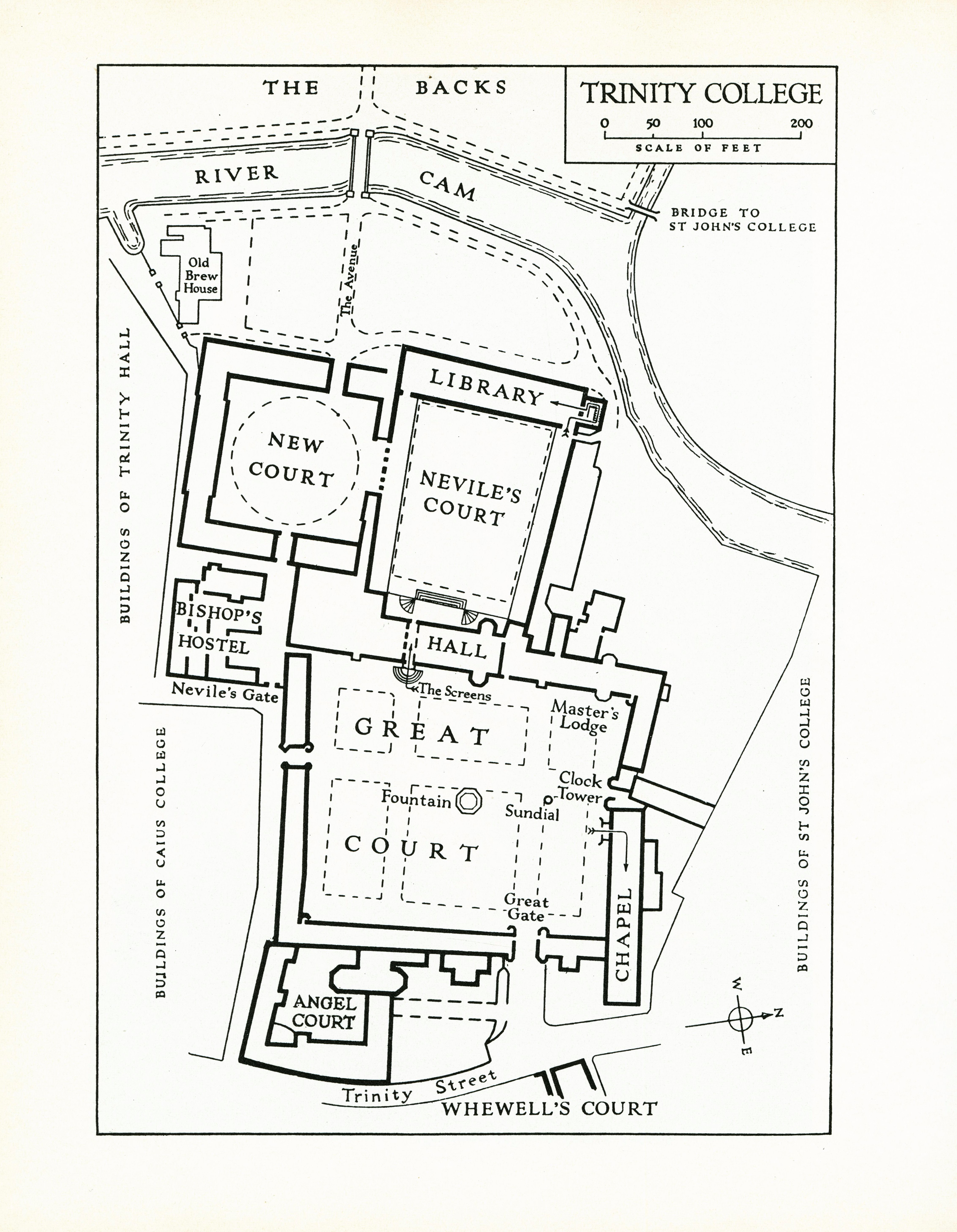 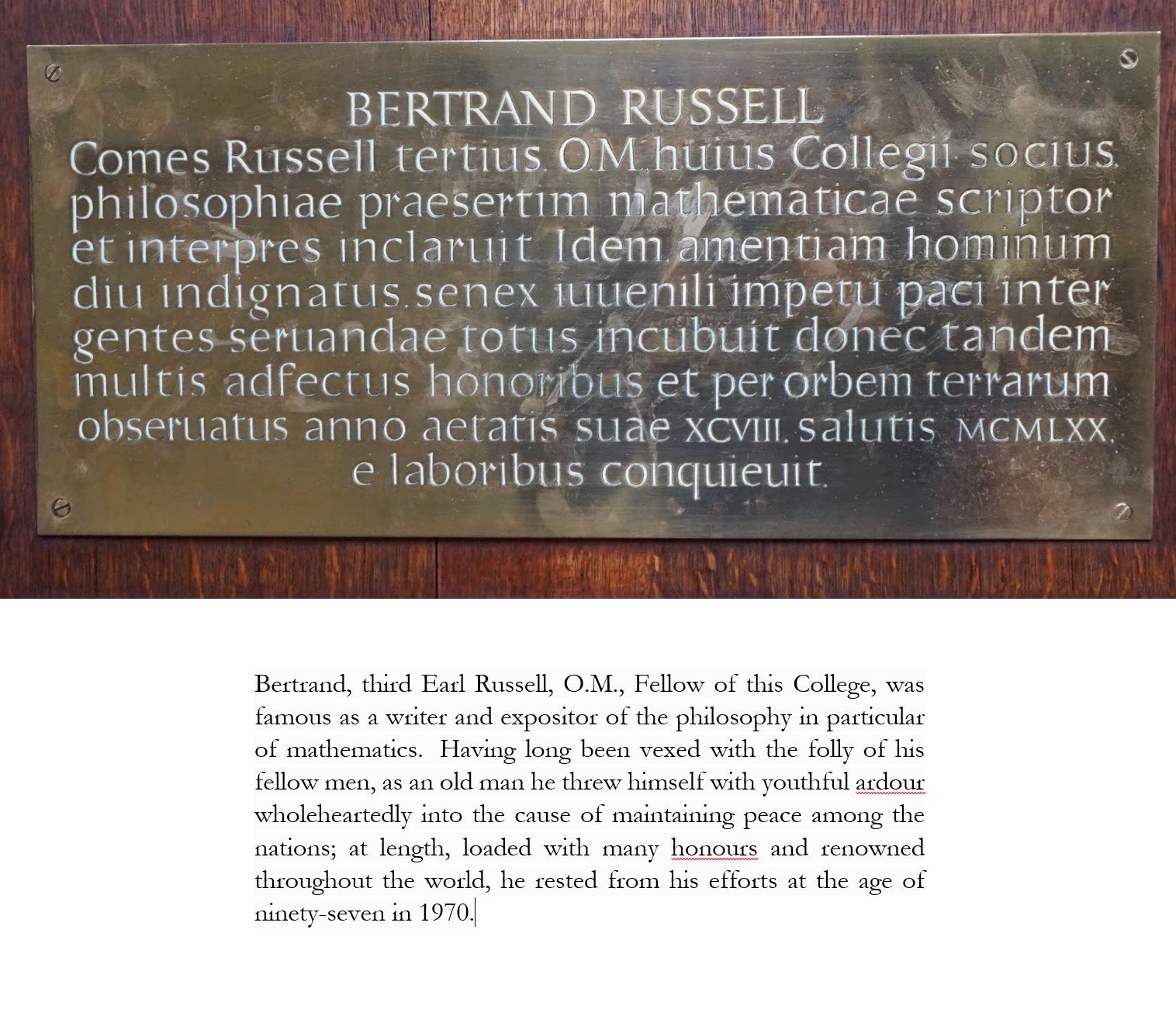