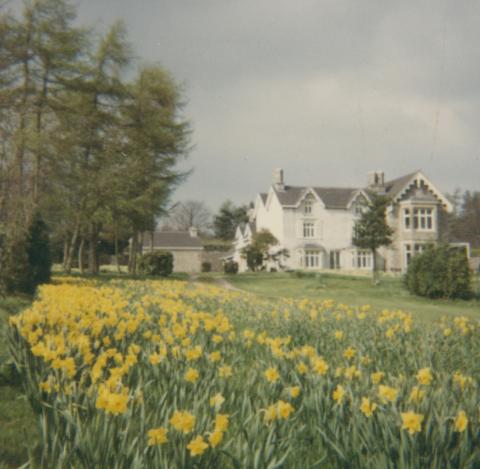 Bertrand Russell was born at his parents’ home, Ravenscroft, in Monmouthshire on 18 May 1872. His older brother Frank1 wrote about the birth: “my brother Bertie was born, and I remember being taken up by Lizzie [Williams] to have him presented to me when he was about an hour old” (My Life, p. 25). Russell in his Autobiography described the house as being “very lonely”, located “in a wood just above the steep banks of the Wye” river (Auto. 1: 17). The house was situated near the village of Trelleck in South Wales, close to the border with Gloucestershire, England. 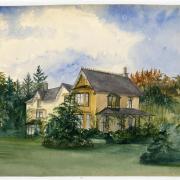 Water-colour of the house painted by Lady Amberley

His parents, Viscount and Viscountess Amberley,2 had previously lived at Rodborough Manor in Stroud, Gloucestershire which was owned by Amberley’s father Earl Russell. In 1870 the Earl decided to sell Rodborough and the Amberleys were forced to find somewhere else to live. They visited Ravenscroft for the first time on 14 April. It was then owned by a Mr. Morris. Amberley liked it at once but his wife Katharine did not. She was disappointed finding the land “flat & tame” (Amberley Papers 2: 325–6). The asking price was £7,000. She did, however, write a favourable assessment of the house itself: “A good house, pretty drawing room with 3 windows … very good dining room & one small study.” There was also a kitchen garden (Amberley Papers 2: 326). Although there were 88 acres of land, there was no view of the Wye from the house. The dressed stone house itself was quite large with ten bedrooms. It had extensive bay windows, quoins, gables and an imposing verandah. On the 24 June with time running out to find a place, they decided on Ravenscroft, buying the house with only 40 acres of land for £5,000 (Amberley Papers 2: 330). They moved in on 20 July with their two children, Frank and Rachel, and five dogs. Arriving at the house, Katharine and her husband walked in the nearby wood which she had not seen in her previous visit. She became “quite enchanted with the wildness & beauty of the place ...” (Amberley Papers 2: 365). 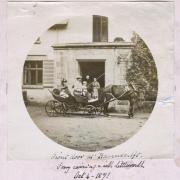 Lord and Lady Amberley with their children Frank and Rachel

Frank remembered the house quite well, devoting the first four chapters of his autobiography to his time there. He lived at the house from the ages of five to eleven. He described the house and its many rooms in detail. Inside the house were sitting-rooms, a dining-room, kitchen, store-room, drawing-room, study, bedrooms and bathrooms. “A considerable stable with yard and coach-house adjoined the house…. At the back of the stable and the kitchen was a large kitchen-garden.… I remember the three beehives" (My Life, p. 3). As for staff he recollected “maids and later, governesses.… The most important member of the household was Mrs Williams; her husband was the gardener.… both Welsh (My Life, p. 4). Frank was allowed to play with their children which was very unusual for that time. There was also a man called Richards whom Frank thought was either “a cowman or under-gardener” (My Life, p. 7). The governesses were always German; “My brother [Bertie] knew German before he knew English (My Life, p. 17). His earliest memories were of “the making of the little square garden beyond the drawing-room verandah” and “the killing of a snake” in that garden. In the grounds was a Log House “raised on piles so that the upper part was some ten feet high” which was used for picnic teas (My Life, pp. 6–7). Frank and his sister Rachel “used to spend many hours round about the kitchen-garden eating pears and apples (My Life, p. 16). Frank only remembered two dogs, a white Spitz named Argus belonging to his mother and “a large black dog called Bosun, probably a mongrel retriever…” (My Life, p. 14).

Frank wrote that he did not have any “clear recollections” of his sister, Rachel (My Life, p. 4). A few pages later he went on to add that he remembered driving “her about in a little goat carriage in which we went sailing gaily about the country roads quite unchaperoned and quite unprotected.… Later I had a pony which was called Fenella, and I remember that I used to ride her bareback…. [Once, going] “too fast round the corner into the stables I shot off his back and brought up my poor little head against the stone wall.… One of my regular duties was to take the letters in to the post at Trelleck every afternoon on my pony” (My Life, p. 13). Thus is seems rather strange that their aunt Agatha in Dieppe wrote to their mother, Katharine on 3 Sept. [187–?]: “Mama [Countess Russell] has just got Amberley’s arriving letter, with the account of Rachel’s wonderful fox hunting! It is astonishing that she should be able to ride so well; I should have thought she would tumble off in no time.… I have never seen any hunting in my life …” (document .078631). 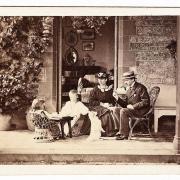 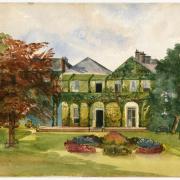 The family taking tea on the terrace with Argus, the spitz
Water-colour of the house, with terrace, painted by Lady Amberley

The Amberleys were not to live at Ravenscroft for long. Katharine and her daughter Rachel, aged 6 ½, died from diphtheria in 1874. Countess Russell expressed her concern about the situation, writing her son on 28 March 1875 that his two boys “look to you for all the tenderness of father and mother combined in order to be as happy as children ought to be” (My Life, p. 28). Viscount Amberley died eighteen months later from bronchitis in 1876. He joined his wife and daughter who had been buried in the garden, but their bodies were later moved to the family vault at Chenies Manor, Buckinghamshire. The grave stones were left. Bertie went with his brother Frank to live with their grandparents at Pembroke Lodge in Richmond Park, just outside of London. He would not return to Wales to live until 1933 when he moved to Deudraeth Castle Hotel in Portmeirion.

On 7 May 1948 Stanley Unwin wrote to Russell, quoting an extract from a local history book found by his oldest son who lived near Monmouth. “Lord and Lady Amberley were both possessed of views on life in strange discord to those of the simple-minded people among whom they settled, and strange stories are told of their proceedings and of the upbringing of their children.” The Amberleys were certainly different from the conventional landed gentry’s families that followed them, the Bosanquets and the Hobkirks. Frank remembered that “the only neighbours with whom we were on visiting terms were the Gallengas, who lived at the Falls of Llandog. He was in some way associated with the plots of Mazzini, and had to fly from Italy in consequence” (My Life, p. 5). 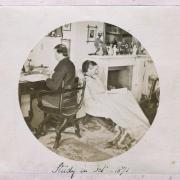 The identity of the family who purchased the house after the Russells left is not known. It may have been the Bosanquets. Sometime between 1876 and 1887 the name of the home was changed to Cleddon Hall3 which is the name still used today. The first mention of Cleddon Hall in The Times is the marriage announcement of Arthur Bosanquet’s son, Oswald Vivian Bosanquet to Alys Derriman 1887. The property stayed in the family until 1957. During that time various mentions of the Hall appeared in The Times. In 1897 the marriage of Nora Bosanquet to Clarence John Hobkirk was announced. In 1936 Arthur's widow, Isabella, died at Cleddon Hall. The Hall was mentioned in The Times when a fox was killed in March 1939 by Lady Curre's hounds in the open field nearby. Although it was sold by auctioneers Messrs. Bruton, Knowles and Co. (Gloucester) at Chepstow in October after Arthur’s widow died in 1936, it was purchased by her daughter, Nora, and her husband, Brigadier-General Clarence John Hobkirk. It went up for auction by Bernard Thorpe & Partners in 1957 with an “upset price of £2,000”. The following year, 1958, Nora Hobkirk died; Cleddon Hall was mentioned in her death notice. Her daughter Colonel Elspeth Hobkirk grew up at Cleddon Hall, spending her “formative years” there.

In the spring of 1953, Russell visited Ravenscroft with his wife Edith. He wrote in his Autobiography that: “The house itself was kept up, but during the war the grounds had got into a sorry condition” (Auto. 3: 68). Much later Edith remembered this visit in a letter to Brendon Lynch who had recently visited Cleddon Hall. She wrote: “When my husband and I made a sentimental pilgrimage there—many years ago, not long after the Second War—it and all the grounds were in a very derelict state and I rejoice that it is now, I am told, being restored to some of its former charm” (12 May 1972). 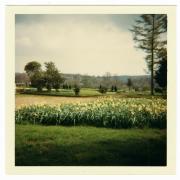 The Hall was sold to George and Dorinda Taylor in 1964. They found the house in great need of repairs. In 1968 they got in touch with Christopher Farley, Russell’s secretary, who visited the property. Farley wrote to the Taylors on 2 July after his visit, telling them that Russell had “several paintings by his mother of Cleddon Hall including one which hangs in his dining room and shows the house almost exactly as it is today, with the exception of the drives, which were much larger a hundred years ago.”4 Although the Russell Archives has several watercolours by Katharine Amberley, only two have been identified as being of Ravenscroft.5 Russell also wrote to the Taylors on 10 July 1968, noting that since he left before his fourth birthday, he had no memories of the house. He thanked them for the photographs they sent him.

The Taylors took great pains to restore the house. Of course the kitchen and bathrooms had to be updated. In correspondence with Kenneth Blackwell, Russell Archivist, Mrs. Taylor described the work they had done on the staircase where dry rot had set in. Since timber was no longer supplied in the same sizes, her husband George was cutting the treads himself to match the existing stair width (9 Jan. 1973). She wrote an article on Ravenscroft’s restoration.6 She felt the “home was exactly as the Amberleys had left it....” The kitchen dresser contained Viscount Amberley’s funeral service. 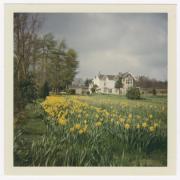 More recently, the house was sold in 2009 for £1,400,000 to Jeffrey and Melanie Hall. It is not known if the Taylors owned it until then or if it had yet another owner. At the time of sale the description of the house noted that many period features had been retained. These included shuttered windows, fine fireplaces, ceiling coving, sprung floors and panelled doors in the main reception rooms. The drawing room had fine plasterwork with full height French windows leading out to the gardens. The size of the property was 31.60 acres. The Halls listed it July 2012 at £2 million and the following year for £50,000 less. 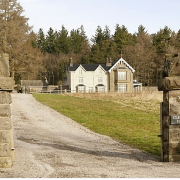 Russell’s birthplace is still standing. If he had been born at Rodborough it would not, as that property burned down in 1906. 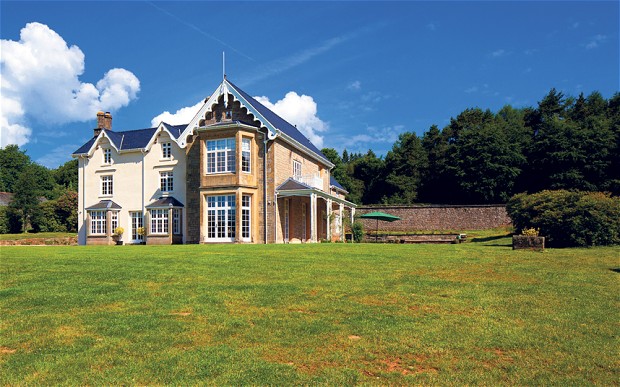 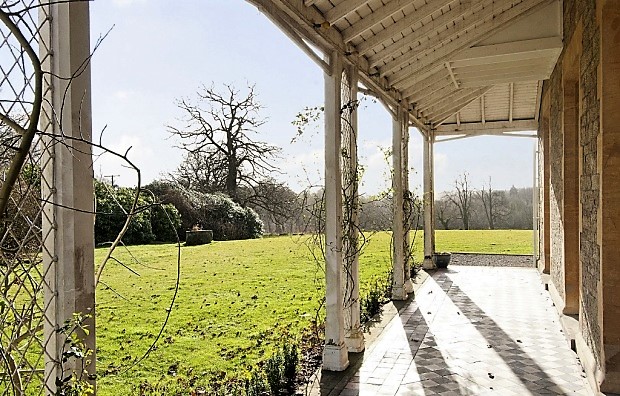 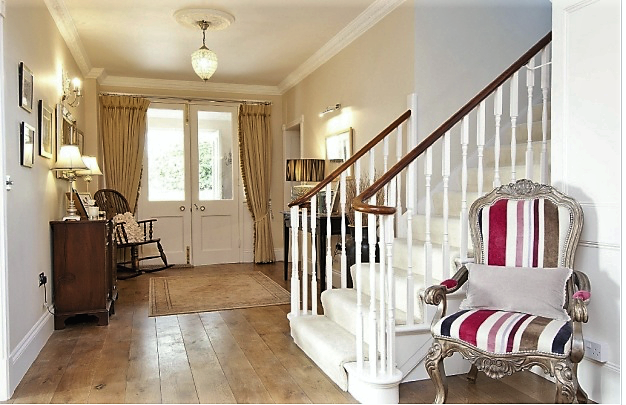 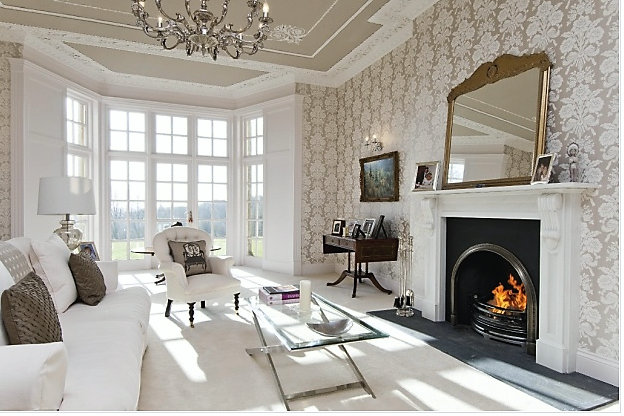 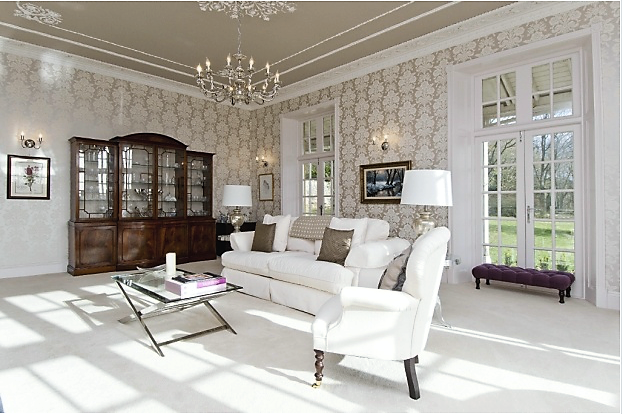